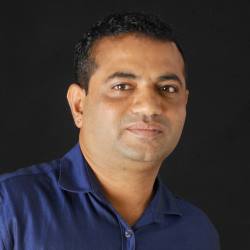 Maxim Pereira Angelore popularly known to his fans as “Baila Boom Maxim”, because of his famous audio cassette “Baila Boom” was born in Angelore, a place known as a ‘Cradle of Talents’ in Mangalore. His parents (late) John and (late) Cecelia Pereira  lovingly call him “Munna”. Maxim is married to Nisha and is the father of Abigail.

“Do you like to achieve anything?  Do it and achieve it right in your youth” believes Maxim.  “Youth is the right time for your achievements when you can realize all your dreams”.  “Keep a do or die approach, be focused and you can achieve your goals. Try repeatedly before your youth fades away, and you will definitely succeed” With this mantra, talent and forceful drive he rightly bagged the honor of “Yuva Pratibha” at the “Konkani Darbar-2002! Maxim was awarded the title ‘Melody Star’ by Pearls of Mangalore a Konkani speaking association in Abudhabi on 2nd December 2011.

As a boy Maxim was in the Angelore parish choir.  The encouragement from the Choir-Master, his parents, family & friends, inspired him to improve his musical talents.  Right from childhood Maxim used to sing and practice music everyday. He used to sing in church gatherings, take part in music competitions, sing songs in party get-togethers, and win appreciation from public. He was awarded the first place for three consecutive years in the Kalasampath inter parish singing competition, in Mangalore. He has judged several singing competitions and trains young budding singers and prepares them for various competitions.

He took Konkani music to his heart and reaped the taste of success step by step. He built up Angelore's 'Glorious' band Twenty two years ago and overcoming several hiccups, he achieved success. Today the 'G Major" band under the wing of Glorious Angelore is a renowned name in Mangalore. Be it a wedding, anniversary or any grand occasion - G Major a unit of Glorious is ever ready to entertain the crowd.

Another milestone achieved, through the making of ‘Manasa’ Konkani telefilm, a dream project was released on the 2nd  of August 2015 at Cordel Church Hall Mangalore.
Adding on another feather to the cap, first of its kind a konkani tulu dual language film Ashem Zalem kashem is all set to hit the theaters in April 2017 under the banner of Glorious Angelore Productions.

At present he heads the Graphics 'n' Signs, G Major Music group & The School of Music in Mangalore.

To his credit he has 13 music Albums, 12 Maxim Musical Nites and over 50 stage shows and has performed in Mangalore, Door Darshan Chandana, UAE, Kuwait and Bahrain.

Possessing an inborn flair for music, he is not only versatile, but can also play various musical instruments, like guitar, keyboard and drums. Having the pen name “Glomax” he has composed and tuned more than 150 songs in Konkani and a few songs is tulu as well.